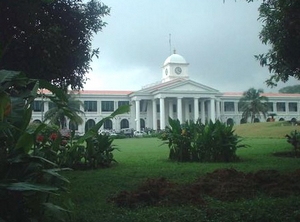 There are many palaces in and around the city like the Kowadiar Palace and Padmanabhapuram Palace. The city of Thiruvananthapuram derived its name from the Sri Padmanabha Swami Temple.

Toursist Places
Sri Padmanabha Swami Temple : Sri Padmanabha Swami Temple is situated at East Fort near KSRTC Bus stand.
Attukal Bhagavathy Temple : Attukal Bhagavathy Temple is located at Attukal, 2 km away from the city. This temple is considered as the Sabarimala of the Women.
Thiruvananthapuram Zoo : The Zoo at Thiruvananthapuram is one of the best in India. This is one of the major Zoo in Asia also.
Government Arts Museum : Government Arts Museum is situated near the Zoo. The architectural beauty of the Arts museum building is marvellous.
Sree Chithra Art Gallery : Sree Chitra Art Gallery is located near to the Museum. The art gallery was established in 1935.
Observatory : Observatory is situated in the premises of Kanakakkunnu Palace. This is the highest area of the city, 60 meters above sea level.
Science and Technology Museum : The Science and Technology museum is located near the PMG office and the Muscut Hotel in the heart of Thiruvananthapuram city.
Priyadarsini Planetarium : Watching the orbiting planets and stars on a doomed ceiling through projectors is a fantastic experience to the spectators.
Kowdiar Palace : Kowdiar Palace's architectural work is famous. The entry to this famous palace is restricted.
Chacha Nehru Museum : This museum was established in 1980 and is named after the first Prime Minister of India, Pandit Jawaharlal Nehru.
Shanghumugham Beach : The Shanghumugham Beach lies about 8 km away, on the Western part of Thiruvananthapuram city.
Akkulam : Akkulam is 9 km away from the Trivandrum city. Kerala's largest Chidren's park is located here.
Veli : The Veli lagon is seperated from the Arabian sea by a narrow sand bar.
Kuthiramalika : Kuthiramalika is situated near East Fort, Thiruvananthapuram adjacent to Sree Padmanabhaswamy Temple.
Vizhinjam : Vizhinjam is located 15 km away from Thiruvananthapuram city. There is a small port at Vizhinjam now.
Kovalam : The palm-fringed bays offers a place for relaxation. This wonderful beach is a paradise for tourists.
Parasurama Temple Thiruvallam : The Thiruvallam Parasurama temple is situated 10 km from Trivandrum on the Kovalam route.
Varkala Sivagiri : Varkala is about 40 km from Thiruvananthapuram. The famous Papanasam beach is near Varkala.
Aruvikkara : Aruvikkara is beautiful place 16 km north to Thiruvananthapuram. Karamana river flows through this place.
Neyyar Dam : Facility for Boating in the reservoir and a beautiful garden are the major attractions.
Koikkal Palace : Koyikkal Palace is located at Nedumangad 18 km from Trivandrum, on the way to Ponmudi and Courtallam waterfalls.
Peppara : Peppara Wildlife Sanctuary is a beautiful forest area situated 50 km from Thiruvananthapuram on the way to Ponmudi.
Ponmudi : Ponmudi is a tourist centre located 61 km from Thiruvananthapuram. This place is 610 meters above sea level.
Agasthyakoodam : Agasthyakoodam is a mountain peak at a height of 1890 m above sea level in Western Ghats at distance of 61 km from Trivandrum
Tropical Botanical Garden : Tropical Botanical Garden and Research Institute is located at Palode, 35 km from Thiruvananthapuram.
Padmanabhapuram Palace : Padmanabhapuram palace is situated 63 km away from Trivandrum in the Kanyakumari route, at Thucklai
Thumba : Thumba became well-known to the out-siders after the establishment of Thumba Equatorial Rocket Launching Station (TERLS)
Bay Watch : Baywatch has many rides which matches international standards.
Kerala Web Directory  Malayalam Movies  Malayalam Actress  Rife Healing  Painting Videos  Rupee Manifestation Videos  Ancient Indian Facts  Chakra Balancing  Meditation Videos  Zone Life Healing  Rupee Visualization  Solitaire Games