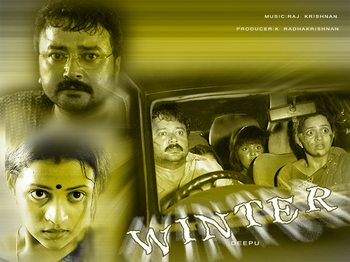 Jayaramâs Winter, which has completed shooting three years ago has started gathering dust in cans as producer of the film was not able to release Winter due to the poor status of heroâs popularity. Now the film is getting released in theatres on July 16.

This delayed horror film was director Deepuâs debut film, though the Dileep starrer comedy flick Crazy Gopalan, made into the theatres. Crazy Gopalan was a good hit which made the director get some attention inside and outside the industry.

The producer K. Radhakrishnan has been able to distribute the film due to the super hits Jayaram had back to back, Veruthe Oru Bharya and Bhagyadevatha.

The film is releasing on Thursday, July 16 and has competition from Puthiya Mugham.