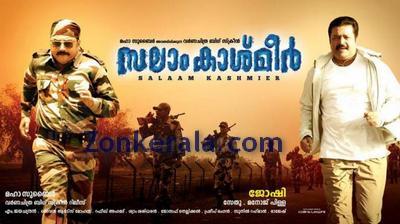 Joshie's 'Salaam Kashmir' will see the return of Suresh Gopi to the big screen after small gap. Script is by Sethu. Salaam Kashmir is produced by Maha Subair under the banner Varnachitra Release.

Suresh Gopi does the role of an army officer, Tony Eppen, a native of Kanjirappally. Mia is the heroine as the wife of Jayaram's character Sreekumar. Jayaram plays another important role in this film. Major portion of the film is hot in Kashmir. Salaam Kashmir is a family drama. Music is composed by M Jayachandran.

Lalu Alex, Krishna Kumar, Vijayaraghavan and Ponnamma Babu are also in the cast.

Salaam Kashmir will be released on September 27th, 2013.