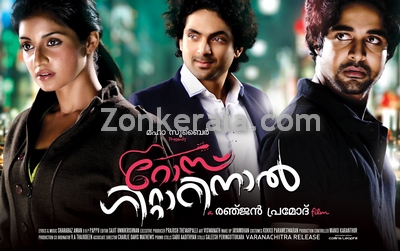 Scenarist turned director Ranjan Pramod is coming up with his new movie Rose Guitarinal. The film is produced by Maha Subair under the banner of Varnachitra Big Screen and Colour Pencil Films.

Rose Guitarinal is a romantic movie with good music. The film tells a triangular love story.

The song in the movie 'Chutti Varum Katte' is the first song in Malayalam Cinema to be shot in a single shot with no cuts. The film comes up with an array of new faces. Manu and Tamil actress Athmiya are in the leading roles along with Rejath Menon, Richard Joy Thomas, Jagadish, Anna Bella, Thara Kalyan and many others.

Rose Guitarinal is the story of a girl named Tara, a lower middle class girl. Her father is unemployed and her mother left home years ago. She gets campus selection to become an air hostess and the film tells the story of the 21 days in Tara's life after she gets selected.

Tara has to adjust to the new surroundings unknown to her, higher class people, clothes she has to wear and English language all becomes a problem for her. But she has to survive and the film tells the story of Tara's experiences. She has to go for the company's new year party and it is also the first time in her life she has to attend one. Will she go and what will happen forms the rest of the story.