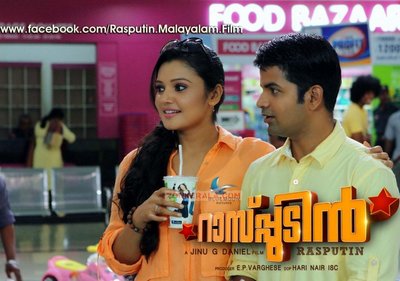 
Rasputin is an upcoming Malayalam romantic comedy movie directed by debutant director Jinu G. Daniel. The story of the film is by the director himself. Vinay Forrt plays the leading character in Rasputin.

The other characters in Rasputin are done by Sreenath Bhasi, Aju Varghese, Joy Mathew, Vandana Menon and Archana Gupta. The film is produced by E. P. Varghese under the banner Blue Moon Pictures.

Rasputin is a youngsters story, with Vinay Forrt, Sreenath Bhasi and Aju Varghese play the roles of Susheelan or Susheel, Radhenathan or Rats, and Gopalan or Gops, respectively. The three youngsters who work for a corporate firm share an apartment in the city. Susheel's character is an introvert and how Smitha (played by Vandana Menon) brings about a change in his character is the crux of the story.

The shooting of the film is completed in various locations in Kerala, with a baywatch style song shot in the Varkala beach. Post production work of Rasputin is progressing and the film is expected to reach screens by August.
Rasputin Movie Stills
Kerala Web Directory  Malayalam Movies  Malayalam Actress  Meditation Videos  Meditation Blog  Stock Markets & Money