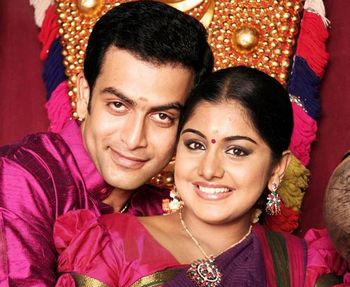 Deepan had earlier debuted as an independent director with movie The Leader which hadnât made any impact at the ticket booth.

In the film, Prithvi plays a mridangam exponent, Krishna Kumar who comes to Cochin to pursue engineering course. The pleasant life of this boy soon undergoes drastic changes. The eventful journey takes him to face the real estate mafia and liquor moguls portrayed by Saikumar, Shammy Thilakan and Bala.

Priyamani plays an engineering student, Anjana. Meera Nandan, whose earlier films were Mulla and Currency has sensational character in this film as Sree Devi.

Some portion of the movie was shot in Ottappalam at the famous Varikkassery Mana. A song was canned in Malaysia.

After the much heralded Thirakkatha, directed by Ranjith, Prithviraj and Priyamani squad in Deepan's new film.

Prithviraj is teaming up with Meera Nandan for the first time in Puthiya Mukham, which devotes equal importance to love and action. Prithviâs last Malayalam film Calendar hadnât made a fare and immediately left theatres. Mukesh had more importance in that film.
Vijayaraghavan, Jagathi, Suraj Venjaramood, Janardhanan and Sudheesh are also in the cast.

This big budgeted film was scripted by Sindhuraj and is produced by Anil Mathew and S. Murugan under the banner of Bethesda Productions. The film is marketed by Time Ad Release.

The film is probable to bang Cinema halls next week.