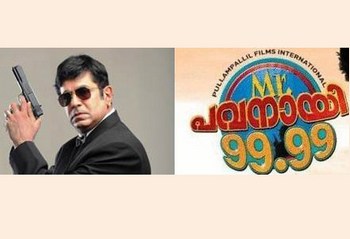 Mr. Pavanayi 99.99 will see the return of Pavanayi, the don from Sathyan Anthikkad's evergreen hit 'Nadodikattu'. Captain Raju who played Pavanayi in Nadodikattu used all modern weapons and traditional ones. But in the end he dies slipping from a multi storeyed building.

The new movie will start from the idea that Pavanayi did not die, but escaped as he fell in water. He escapes from Police to go to Ireland. Now Pavanayi returns with another task, to kill a girl and her lover. The task was given to him by Kodan Brothers, the millionaire brothers. Pavanayi tries to kill the duo and the happenings during his trials form the crux of the story. Guinness Pakru is the new PavanayiÃ¢â¬â ¢s assistant.

P.V. Abraham produces the movie Mr. Pavanayi 99.99 under the banner Pullampallil Films International. Story of the film is by Captain Raju. He directs the movie after a long gap. Screenplay is written by Rupak and Nishak. Ponnamma Babu's daughter Pinki and Vijayaraghavan's younger son Devadevan are playing the leading roles. K B Ganesh Kumar, Kaviyoor Ponnamma, Ponnama Babu, Mala Aravindan and Kunchan are the other artists in the cast.

Pradeep Palluruthi and Somasekharan Nair handles the music composition for the lyrics of Vayalar Sarathchandra Varma, Hareesh Nair and P.V.Abraham.