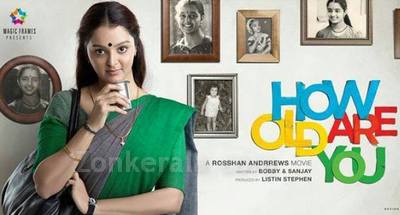 Even before her first movie posters are released, Manju Warrier has her second movie in hand. The first look poster of the film 'How Old Are you' is out. The film is titled 'How Old Are You?'. The film will be directed by Rosshan Andrrews.

Manju WarrierÃ¢â¬â ¢s return to the big screen will be through Renjith movie. How Old Are You? is scripted by Bobby - Sanjay team. Kunchacko Boban is also playing a leading role in this flick.

Listin Stephen produces this film under the banner Magic frames. How Old Are you will start shooting in January.