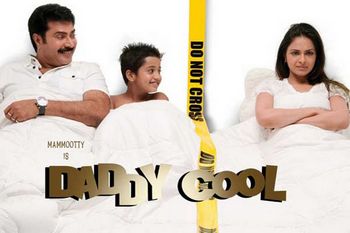 Mammootty is getting continuous flops for some time. This started with his guest appearance in Bipin Prabakarâs One Way Ticket and become full fledged with Padmakumarâs Parunthu. With Love in Singapore he found new lows.

Mammootty is not affected by the result of these films as he has more than a dozen movies in hand.
Mammootty was specialist in sentiments earlier. His Pappayude Swantham Appus by director Fasil has created waves in kerala years ago. Mammooty is back with a father-son relationship in the forthcoming film Daddy Cool. Daddy Cool is Boney Mâs international hit track. Choosing âDaddy Coolâ helps audience to keep the name in memory.

Father son relationship and cricket will be the business proportion of this film. The story revolves around the bond of a father and his only son who is very passionate about cricket. Mammootty plays the character of Antony Simon, a Crime Branch officer.

Model turned actress Richa Pallod of Shahjahan fame is making her debut in Malayalam movie as Mammootty's heroine in Daddy Cool. Richa started her acting career as a child artist in Lamhe in1991. She acted in Pardes after a small gap. She is a model turned actress who have acted in music videos, advertisements, and Hindi, Tamil, Telgu films.

Her films in Tamil include Something Something, Unakkum Enakkum, Shahjahan and many more. She has won Filmfare Telugu Award for Best Actress for her performance in Nuvve Kavali.

Richa appears as Annie the wife to Mammootty as well as the mother to their seven year old son, Aadi Simon.

Mammootty is playing as a cool daddy who supports all the blunders done by his son and mother gets fed up with them.

Daddy Cool featuring Mammootty marks the debut of director Ashiq Abu. The director himself has written screen play and has worked as assistant to Kamal.

Samir Tahir who is famous for his work in Big B handles the camera.

Anil Panachooran, Biji Bal team will handle the music section of the movie.

The film is produced by Alwin Antony, under the banner Wall Green Productions.

The film has started shooting and, is expected to be Mammoottyâs summer release.