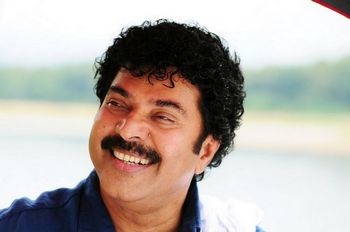 There are films, which make fan following for actors and there are films which try to satisfy fans so to sell tickets in theatre. Film Loud Speaker comes in the first category.

After a lot of 'child play' in his recent movies, Mammootty is back where everyone wanted him to be.
Mammoottyâs less educated character have never failed to attract audience.

Mike (Mammootty) arrives in city as a kidney donor to an aged wealthy man, Mr. Menon. As the operation date is not fixed he stays in a posh flat with Menon. Mike is a pure hearted villager who talks aloud and is happy. He carries an old battery operated radio always. He is much found of his deceased father and talks about the adventures of his father.

The film is about the residents in flat, their budding relation with Mike, and about Menonâs Life.
Loud Speaker is such a beautiful movie that viewers get sucked into. The story has innocence and humanity that makes the film good.

Gracy Singh famous for her role in Lagaan is beautiful and maintains a natural relationship with Mike (Mammootty).
After years Harisree Asokan is back with a refreshing comedy as Christian Priest.

The film is nicely made though the director couldnât patch up some scenes comfortably. The continuity in comedy part handled by Jagathy has not been maintained well. Suraj is ok, but has little freshness to offer.

Mammootty and Jayaraj are able to convey emotion to the viewers. Jayaraj who is a minimalist in many films has used the optimum amount of resources to bring screen life to this heart warming story which flows as a river. Jayaraj is also the script writer of this film.

The first half of the film doesnât promises much but itâs the second half which scores. Most part of film takes place inside a flat.

Loud Speaker can be considered one of the best films from this National award winner director. Loud Speaker is a film every Malayali should watch. This is a film with real characters and real emotions.