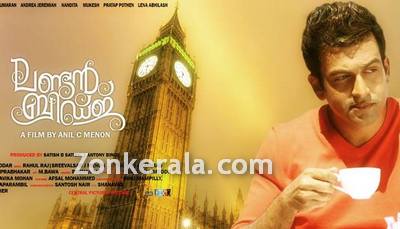 The upcoming Malayalam movie 'London Bridge' which was earlier scheduled to release during Onam will hit screens in October only. The Anil C Menon movie has Prithviraj and Andrea Jeremiah in the pivotal roles.

London Bridge is shot entirely in United Kingdom. Mukesh will be seen in an important role. Pratap Pothen and Nanditha plays other important characters. Mithra Kurian, Sunil Sukhada and Lena are also in the cast.

London Bridge is a big budget movie in Malayalam. the film has camera by Jithu Damodar. Praveen Prabhakar does editing. Music is by Rahul Raj and Sreevalsan J Menon. Background Score is also by Rahul Raj.