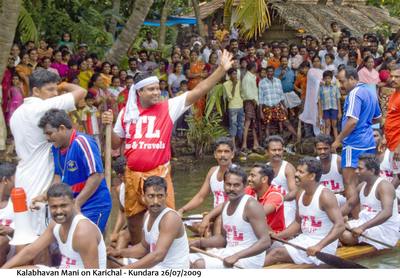 Malayalam film actor Kalabhavan Mani took charge as the Captain of Karichal Chundan for the Nehru Trophy Boat Race, to be held in Punnamada Backwaters in Alappuzha, on August 8, 2009.

Kalabhavan Mani who came for the trial excited the rowers as well as the onlookers with his folk songs. The trials took place on Sunday in Kallada river, near Kollam.

At Punnamada, the boat will have to cover 1.35 km in 5 minutes. At the trial venue at Munroe Thuruthu, Mani and his team are trying to clock 1.5 km in that time. The people of Munroe Thuruthu say the training exercise was like watching the boat race itself.