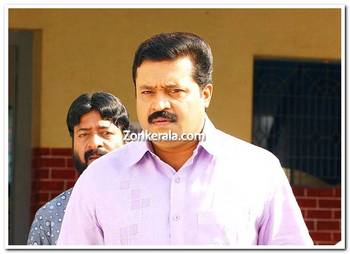 Stories which involve marriages happening in Tamil Nadu have always attracted Malayaleeâs attention. Film lovers in Kerala cannot forget one of the biggest hit Thenkasipattanam which tells the story of friendship with Suresh Gopi and Lal as heroes.

Kanchipurathe Kalyanam is a film made on analyzing the variables of many hit films. Suresh Gopi and Mukesh where friends and had earlier run an event management company together. Mukesh married Sureshâs sister which is not very much appreciated by the hero. As revenge to his sister Suresh lived as a bachelor. The entire film hangs on the thin thread that Mukesh need Suresh to marry which is not acceptable to the latter.

Heroes were asked to take up an assignment to manage a marriage function in Kanchipuram. They took up the assignment and moves to the place. But they hadnât expected some villains and a romantic heroine is waiting. As story moves forward viewers find there were no hard feelings between the old friends, just like the feel we get while peeling onions. Nothing inside.

The film has everything that generally filmmakers believe the audience needed.

There are many films from successful director Shafi which discusses the problems created by Marriages. What will happen if yet another film is made on the same formula by a new director duo? Thatâs what we are to witness in weeks to come.

If a film is made by putting ingredients of many successful films it may become successful. But if directors are cooking it for the nth time it may not taste good for the audience. While watching this film one may remember many old hit films.

Still this film has got some potential to make an average hit. Kanchipurathe Kalyanam is not a bad film. The rich cast in movie promises to attract youth and family audience. The posters are colorful which guarantees fun.

Generally the acting is carried out well. Audience feels the absence of Salim Kumar and Suraj Venjaranmoodu.

Sureshâs mannerism looks exactly as in many other films.

On directing front the duo have done commendable work, especially in crowd scenes, though they lacked finesse. If they can change the beliefs on creating successful movies and come up with good stories they have the caliber to create hits.

Kanchipurathe Kalyanam has nothing new to offer but is still a watchable flick.