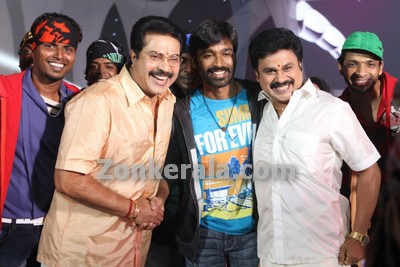 The movie Kammath and Kammath starring Mammootty and Dileep as Kammath brothers is all set to release. Thomson K Thomas directs this much expected movie, which also has Tamil actor Dhanush playing a cameo role.

Rima Kallingal and Karthika Nair are the heroines. Narain, Baburaj, Janardhanan, Suraaj and many others are also in the cast.

Anto Joseph Productions produces this movie which tells the story of Kammath brothers who have a chain of restaurants. They take up an old restaurant at Palakkad and start their Dosa outlet in this location. The hotel has a competitor who sells Biriyani and is not happy with the arrival of the Kammath brothers. The problems that follows form the crux of the story.

The film has a song sequence featuring Mammootty, Dileep and Dhanush, which is made at big budget of Rs. 50 lakh.