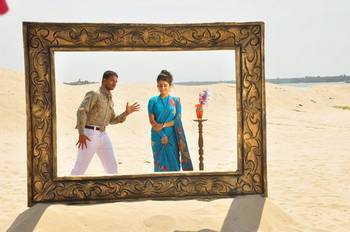 Ivar Vivahitharayal directed by Saji Surendran is a good family entertainer. Bhama is the heroine in this film, where Navya has guest appearance.

Humor by Suraj Venjaramood is the highlight. He was extremely good and was able to make viewers laugh all through the movie.

The songs are good and picturised well.

When a film gets well, all factors come out good. Jayasurya has acted well and is able to make people laugh and create emotion in them. Bhama and Samvrutha put their good effort. Siddique looks young. Nedumudi Venu does his role finely as usual.

Story - Jayasurya and his friends, which include Samvritha have completed MBA from Pondicherry University and comes back to their home in Cochin. Jayasurya's ambition is to marry soon and he expresses it to nearly divorced parents. They wonât take it seriously as he is childish and immature. He later convinces them, his call for to get into family life. He gets married to Bhama who was a radio Jockey. The later part of movie deals with the problems protagonist has to face while leading his married life and mis understanding between the newly wed.

The presence of three actresses in movie attracts the viewers to theatre. The comedy handled by Suraj impresses viewers, which is followed by some sentiments. Being Jayasuya flick filmgoers have lesser expectation which will also help the movie.

Anil Nair's cinematography worked to the mood of the film. The editing is fine.

The film has old song 'Poomukha vaadilkal sneham.. bharya' which first look awkward and create uneasiness and later, as audience moves with story the song seems to suit.

The film comes with its share of flaws though, most of the film happens indoor. In some places it looks like a serial. Movie is very preachy at times; especially to the climax which makes it look a bit over stretched. The back ground music is loud at many places.

Saji Surendran with his experience in serials knows the pulse and made a good movie which can attract family audience.

Though nothing special, the film can be watched with family.