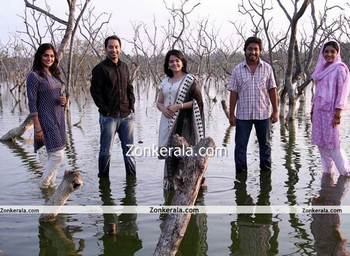 The film takes place in a black-and-white world in the city of Cochin where the streets are wet, where the distance between the rich and the poor are longer than that between a desert and an ocean. The story takes us to the lives of two people, one poor and the other rich and then a phone with some very personal information comes in between them.

Chappa Kurishu produced by Listin Stephen, the producer of traffic is not an adaptation of any film. The film's byline 'based on a 1000 true stories' is perfect match to the story.

Subtle acting, natural dialogues, real like fights are admirable, though the film losses its punch somewhere along the line. Ramya Nambeesan, Fahad Fasil and Vineeth Sreenivasan have done excellent work.

After salt and Pepper which was another commendable flick, Chappa Kurishu will bring young audience to theatre. This shows the entry of new blood into Malayalam industry, who understand international films and enjoy its aesthetics.

The camera by Jomon is good which reminds us of Mahesh Bhatt's films. Editing by Don Max is ok. Many f words have been censored. After his Big B and Bridge scenarist R. Unni is back with an edgy script. Films language is of the common world which every one lives. The characters are vivid and the film talks more with less dialogues.

The film is directed by Sameer Thahir who was the cameraman in Big B. The filmmakers in Kerala have become mature, now its audience's turn.

This is an artistic film which gives pure satisfaction to its makers. Look at these guys and you could the future. And it seems to me, that our future is bright.