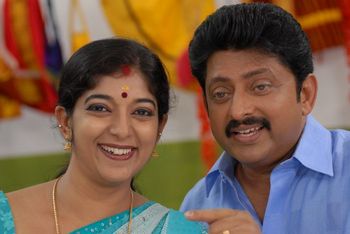 The story goes like this :
Rajasenan, the son of an IG, was forced to leave family as to marry his sweet heart who is from another religion and also from a poor family. Even after having three children his father doesnât call him back. His brother Rahman who runs the family business also is fed up with his fatherâs autocracy.

Heroâs wife (Sithara) who had a block in heart was subjected to an open heart surgery. Having no money our hero took big amounts at high interest from loan sharks. Thus he gets into severe financial quagmire. What he does to get out of fiscal struggle and how the family unites steers the plot.

Viewers seem to like Rajasenan as actor and he has successfully portrayed the decent family man. Will he be able to act in a different way, can be watched in his upcoming film.

Sithara is cool and the three young artists as son and daughters have done their best. The actor who plays father of hero is good. Rahman and Sindhu Menon are ok. Indrans and Jagathy give comic relief towards the middle of feature.

Rajasenan tried to show the perfect family and end up showing a bunch of unnatural characters traveling in an unrealistic plain. Some situations are below average and challenge the wit of an average malayali, who has grown up watching critically acclaimed films. The scene in which the protagonist tries to become a broker has to be viewed to realize its imbecility. The scene of selling chain is as old as Lumier Brothers. Apart from resemblances with Bharatham many scenes are plastic.

In Background and songs erstwhile music were used. Problems with directing are visible. Blocking of scene can be better left unsaid. The filmmaking and story doesnât seem to fit to the year 2009.

The filmâs high point is its climax which greatly appeals to female audience. If good promotions are followed, the film can breakeven easily.