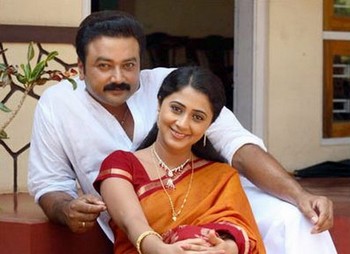 Bhagya devatha is a good flick which is emotional as many of Sathyan Anthikadâs films. Sathyan with ace cinematographer Venu was able to bring life into screen by portraying the beauty and life in Kuttanad.

Story
Jayaram who runs a cable TV franchisee is an average Malayali having big ambitions. To raise the money to buy a fishing boat he married Kaniha, it later turns out that Kanhihaâs father Venu Nagavally was not able to keep his promise to give the dowry on time. After waiting for three months to get dowry he send back his wife to her house. What he did to her comes back as a boomerang. Small surprises are waiting for the viewers towards the end, but the director has managed to can the scene emotionally which made this film watchable.

Even though the problem of dowry is discussed in many movies, this film does it emotionally and in depth. Apart from that everything else in the film is usual.

Jayaram looks nice; his makeup looks similar to that in Veruthe Oru Bharya.

The character played by Narien could have been done by any other actor, as when he plays that role the expectations shoots up and audience wouldnât get satisfied with a small surprise in the end.

Venu Nagavally looks accurately as a government employee. The other cast are Innocent as a stage actor, Nedumudi Venu as tourist guide, Mammookoya as fisher man. They all are playing good characters as in many other films. K.P.A.C Lalitha has important character as the mother of Jayaram and his two sisters.
Nothing special is to be said about the characters or the film except Sathyanâs magical touch.

Kaniha has done her role well and has brought freshness to the screen. She is looking beautiful and is acting well.

The songs are ok. The name suits well with the story of the film. Seems like the producer will be happy with the result of film.

Even though Bhagyadevatha is a regular film from director Sathyan Anthikad, the subject is well handled and the message delivered without preaching. Sathyan was able to gift what people are expecting from him. Bhagyadevatha is a film you can watch with family.